The international touring exhibition, Pier Luigi Nervi – Architecture as Challenge, was born of a collaboration between the Pier Luigi Nervi Research and Knowledge Management Project and the CIVA (Centre International pour la Ville, l’Architecture et le Paysage) – both based in Brussels, the MAXXI/Museo Nazionale delle Arti del XXI Secolo and the CSAC (Centro Studi e Archivi della Comunicazione dell’Università di Parma). Under the direction of an international committee of specialists chaired by Carlo Olmo, architectural historian and lecturer at the Politecnico di Torino, research for the exhibition is the fruit of a collaboration between that institution and Rome’s Tor Vergata and Sapienza Universities. The exhibit is organized into a sequence of stages, each introducing, step by step, new materials, studies and testimonials.

OPENING OF THE EXHIBITION IN LAUSANNE

L’ALLESTIMENTO A SALERNO – THE SETTING OF THE EXHIBITION IN SALERNO 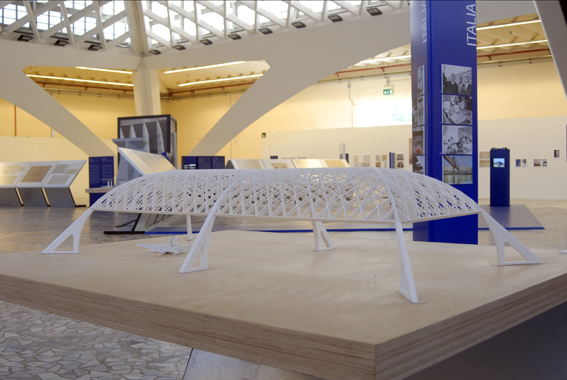 The series of exhibitions, scheduled to be presented in Italy and abroad, is divided into various phases and is characterised by a central nucleus of 12 works selected from among Nervi’s most famous projects worldwide,  plus thematic sections created  “to measure” for each individual venue, introducing new materials, studies and testimonials of particular relevance for each site.

Nervi was one of the twentieth century’s greatest creators of architectural structures, creator of some of the most beautiful works of contemporary architecture, the result of an extraordinary union of art and science in building.

Nikolaus Pevsner defined him as “the most brilliant artist in reinforced concrete of our time”. He has been characterised as having the daring of an engineer, the imagination of an architect, and the practicality of a businessman.

While each of these activities was autonomous, all were intertwined in ways that were sometimes profound, making it possible to reconstruct the developments in a career that, from its very beginning, extended far beyond the common canons of civil engineering as usually applied to architecture.

The exhibit presents the original designs that were the basis for works that were exceptional, both in terms of scope and quality.  They can be found on all five continents and were commissioned by a most diverse group of clients, from UNESCO to Pope Paul VI.  Their study makes it possible to retrace a history that would have been difficult to tell in any other way, in which revolutionary construction techniques are frequently connected to Italian and international political history.

This travelling exhibition is the perfect vehicle to explore the complex world of culture and relationships in which Nervi moved, in addition to providing keys to understanding the formal inventiveness of his works.

The exhibition’s nucleus revolves around the illustration, through original drawings, scale models and photographs, of a selection of 12 of Nervi‘s most celebrated works in Italy and abroad.  First, the air hangars in Orbetello and Orvieto of the 1930s. Next, St. Mary’s Cathedral in San Francisco. Then it’s onto the Papal Audience Hall in Rome, followed by the end-60’s embassy in Brasilia. It also includes a look at the projects for the Olympic Games in Rome at the end of the 1950s, and those of Torino Esposizioni and the Palazzo di Lavoro.

Among exhibition highlights are a series of photographs of ten of Nervi’s iconographic works – all still standing today  – taken by the great Italian master of architectural photography, Mario Carrieri.

The scale models of the twelve works on display, created using today’s rapid prototyping technologies, were produced by the NerViLab of the Department of Structural and Geotechnical Engineering at the Sapienza University of Rome and the Department of Structural Engineering of the  Politecnico di Torino, contributing to an understanding of the depth of Nervi’s thinking, while showcasing its best possible outcome: the spatial expressiveness of structural compositions which speak the language of geometry.

The 12 Architectural Icons Featured in the Exhibition

Never mentioned in his books, though always remembered as one of his dearest works, the Augusteo Cinema-Theatre confirms Pier Luigi Nervi’s ability to devise daring statically indeterminate structural solutions, whose control is entrusted more to intuition and practical experience than to rigorous preventive calculation. In this project he advanced his research into three-dimensional systems in reinforced concrete frames, conceived as load resistant skeletons integrated within the load bearing masonry walls.

Located in the dense fabric of the historical central of Naples, the building is the fruit of a modern real estate operation on the Vomero Hill. The author of the project is the Roman architect Arnaldo Foschini, who commissioned Nervi & Nebbiosi to manage the difficult realization of the roof. Nervi was thirty-five at the time, and by now a well-known designer-builder who had already dealt, on more than one occasion, with difficult roof structures over large public spaces while working for Attilio Muggia’s Sacc. What is more, Nervi & Nebbiosi had recently completed the 24-meter span reinforced concrete roof at the Banchini Theatre in Prato.

However, the project in Naples was more complex. The most significant structure is the roof of the vast hall, 30 meters in diameter, with an operable skylight at the centre. It is composed of a radial system of 18 trusses, used to cantilever a series of tapered brackets, connected at their ends by a ring that defines the central void opening. The beams are the same height as the inhabitable top floor, with the diagonal braces concealed inside the walls dividing the office spaces. The horizontal connections between the columns, along the perimeter of the interior of the hall, are made at the corners to create a large annular Vierendel truss that contributes to the torsional stability of the entire system. Finally, the two floor and roof slabs are used to strengthen the structure in the horizontal plane. 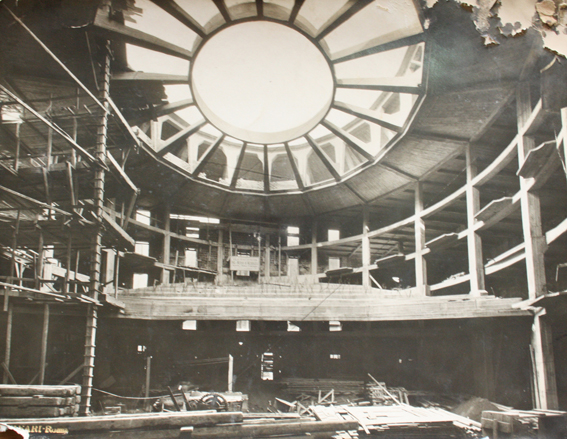