An outstanding author of structural architectures, Pier Luigi Nervi (Sondrio, June 21st 1891 – Rome, January 9th 1979) continued a line of research initially developed by pioneers engineers like François Hennebique and subsequently, among others, Robert Maillart in Switzerland. Like his predecessors, Nervi was both designer and constructor, and he blended the art and science of building using reinforced concrete. Nervi’s concept of structure is similar to that of the Classical period, when the architect inspired and was involved in every part of the process, although, of course, he employed completely different methods. In the majority of his projects Nervi remained faithful to conventional reinforced concrete – a material that can be easily molded and is resistant to both compression and tension – while limiting the use of prestressed concrete. On the other hand, he made use of the extraordinary freedom offered by prefabrication of structural components. Nervi based his work on sound design and construction experience and on an intelligent intuitiveness, with a permanent intense attention to the relationships between structure and shape. This creates a kind of general expressivity in which every part of the structure is designed precisely according to the internal forces to which it is subject, and the role it plays is clearly demonstrated in the overall project Nervi’s first magnificent works were a stadium built in Florence in 1930 and a series of hangars with an area of 4,000 sqm each, built between 1935 and 1940. 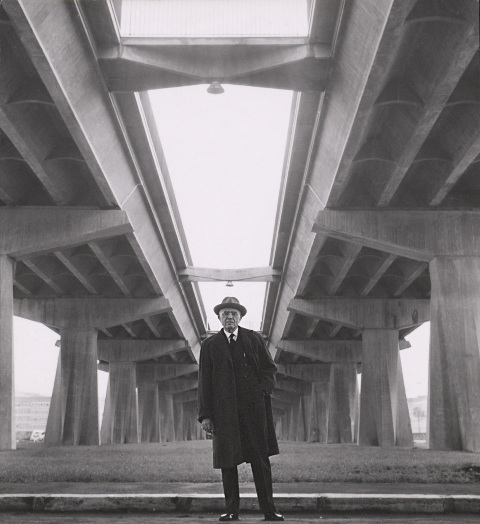 In all these works, Nervi sought a very refined, formal result, and his keen attention to budgetary constraints led him to introduce his own innovative techniques with an extended use, especially in the last hangars, of prefabricated elements, a procedure that will characterize a large part of his subsequent works. After the war Nervi designs and builds some of his most relevant works for industrial and civil buildings (the Pirelli skyscraper in Milan with Gio Ponti, the Papal Audience Hall in the Vatican), exhibition halls and sport structures, in particular in connection with the 1960 Olympic Games in Rome. Since the fifties Nervi becomes the most important Italian designer at the international level with works in Europe (the Unesco headquarters in Paris), North and South America (the George Washington bus terminal in New York, St. Mary Cathedral in San Francisco, the Stock Exchange Tower in Montreal, the Italian Embassy in Brasilia, etc.), and in Australia (Australia Tower in Sidney). 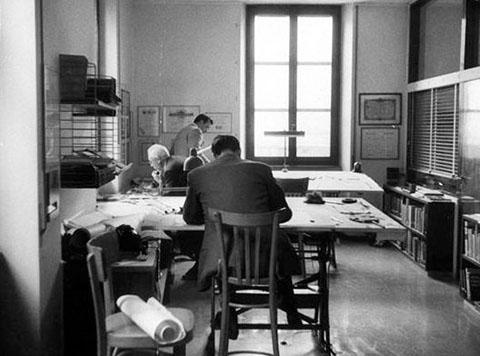 Pier Luigi Nervi (center left) working in his studio with his sons Antonio (in the front from the back)and Mario (in the background), Rome, ca. 1960

In 2010 on the thirtieth anniversary of his death, Pier Luigi Nervi is celebrated with an international itinerant exhibition (Bruxelles, Venice, Rome, Turin). In every step the exhibition analyzes a specific side of the career of this poliedric engineer, a real symbol of the success of Italian engineering in the period after the war. Read here a more extensive biographical profile 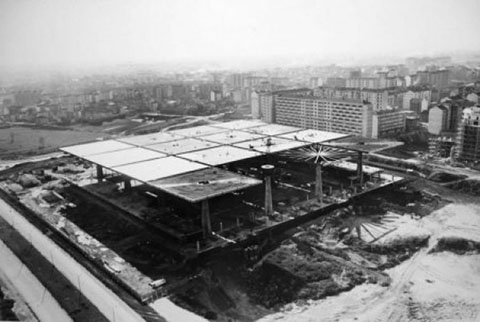 The construction of another iconic project by Nervi, the Labour Palace in Turin, 1960 (Archivio Storico Fiat, Turin)